Gov’t: It’s getting “even worse” on West Coast this year — Experts say over 35,000 baby sea lions could be dead; “This phenomenon is unprecedented in scale” — Hundreds of times more pups than usual at rescue center — Doctor: “Definitely indicates ocean not normal… Really, we should be worried” 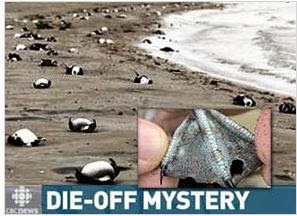 Bird deaths by the thousands on West Coast - blamed on a new parasite?
Enenews 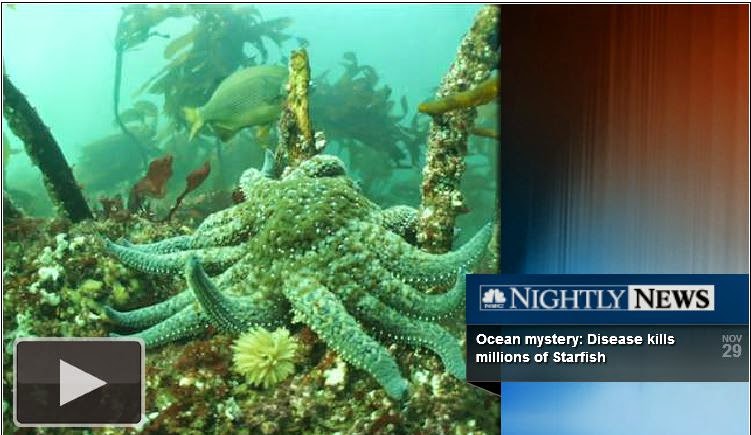 Starfish extinction in the Pacific tidepools - blamed on perhaps a new virus (where did that mutation come from?) 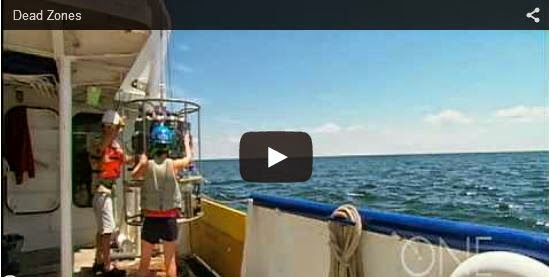 The Deep Pacific Ocean Is Broken/Dead; Devoid Of Life For Thousands Of Miles, Where It Used To Be Filled With Life


Isn't it strange that ALL these things are showing up in the four years after the Fukushima nuclear catastrophe. Or is it?


Scientists want to blame acidification of the ocean, because of plankton die off and/or death of oxygen producing algae. What could have made the one celled organisms die off? Just one cell is far more susceptible to the effects of radiation than an animals made of billions of cells. If the bottom of the food chain is killed off - it starves the rest in the chain that feed on them.


The Pacific Ocean is approximately six degrees hotter than normal. That's El Nino conditions. One article explained in great length that it was the wind patterns that caused this. Or was it radioactive particles that have been flowing into the Pacific Ocean from Fukushima for the last four years? Decaying radioactive substances produce HEAT.


So the world, which supports wildlife preservation, health care, saving species from extinction is now faced with some of the most dramatic changes in one year that we have seen in this century. Quotes from scientists:


"Fukushima radiation found in California milk, fruit, vegetables"
…states and independent labs since the accident, radioactive iodine and cesium—both toxic to human health—have appeared at elevated levels in milk and vegetables produced in California. Radiation has also been detected in milk sold in Arizona, Arkansas, Hawaii, Vermont and Washington since the accident."
http://redgreenandblue.org/2011/06/01/fukushima-radiation-found-in-california-milk-fruit-vegetables/2/


But other than a nuclear plant disaster, "no other accident or disaster can affect 50 million people ... no other accident could cause such a tragedy. Without nuclear power plants we can absolutely provide the energy to meet our demands." Prime Minister Kan of Japan (After Fukushima catastrophe)
http://theecologist.org


It has been four years since this disaster. The Olympics are in another five years (2020). What makes anyone think they will have resolved the problems by then? They have made very little, if no, progress as to date! The famed 'Ice wall' to contain the radioactive leaking water failed. Now they are considering dumping all the stored radioactive water in the tanks into the ocean. The only thing that Japan has changed is the upping of acceptable radioactivity levels from 1 millisievert to 20 millisieverts per year.


While no one thinks the world is coming to an end tomorrow there have been distinct periods in the history of the world when it almost destroyed itself with mass extinctions. Some scientists feel that we are in an ongoing period of this now. For a complete overview of how complex this phenomena is, please visit Wikipedia. It lists at least fifteen different interacting causes of mass extinction ˗ many of which we cannot control. But there is one we definitely can. We need no repeats of the Fukushima nuclear disaster. We have many plants around the world that are aging and of the same type as Fukushima. Third world countries, such as China, are proposing to build hundreds more. Their reputation for quality work is extremely low. Nuclear waste pools are being overstocked and their danger ignored. Unless people speak up, make their voices heard, nuclear will continue to generate its own set of problems affecting the world's inhabitants negatively.


Expert: Disease outbreak on US West Coast is largest ever seen in any population of animals — Tens of millions dead — Official: Gov’t needs to declare emergency before extinction occurs — Many scientists believed radiation from Fukushima to blame (VIDEO)

A new 4th edition of "The Nuclear Catastrophe" has been released for the 4th anniversary of Fukushima. While it is a fictional tale we now know...it can happen. Click here to find out more details.


"#Betrayal", a Nuclear Fiction Novel of Survival, was written to bring attention to the aftermath of the Fukushima disaster. Greed, lies, murder all intertwine. The happenings after such a disaster may be worse than the event itself. Click here to find out more.


"Nuclear Road Trip - Onward to Destruction" was released in December of 2014. It is a novel that brings a group of young investigators at a nuclear power plant into the web of ISIS. They plan to far exceed the NYC events of 9/11. The kindle version is on sale for this anniversary. Click here for more information.
Posted by Unknown at 12:00 AM No comments: