I always thought I was a prepper. After all, I wrote “The Nuclear Catastrophe”, a fiction novel of survival. And the nuclear disaster at Fukushima showed it CAN happen. Actually it seems eerie that I wrote the original novel predicting this disaster 30 years previous to it happening. But after updating it as an EBook I started writing this blog and tweeting. My twitter account  immediately got 20 followers which increased to 30 over the next several weeks. My popularity was overwhelming.

The first things to write about was a list of needed items to prepare in case of disaster. So I blogged and tweeted about that. When I later tweeted that my twitter account was targeting people who wanted to become ready to survive in a disaster, twenty of my thirty followers left in one day. That’s when I knew the government WAS actually watching. I thought about getting them back with a bomb tweet, then decided against it. Now I have almost 3000 followers in 2 twitter accounts so I guess it’s good I didn’t do that.

But recently Bryan Foster, AKA Zion Prepper contacted me and asked if I would review some of his books in “The Prepper’s Survival Guide Series.” I was especially interested in “A Guide to Sheltering In Place,” written after the Boston Marathon Bombings. Violence now seems to intrude more and more into our lives as people want to be noticed for their beliefs (not just have the right to believe as they wish – they want to impose their beliefs on us – like it or not). So I read that one first. Liked it! And must say that there were MANY things I did not know…..or had not thought of.


*how long does water last?
*how much water do you need per person per day?
*what to do if you are out of bottled water?
*how long can you go without water? Without food?
And: *what should you do if a bomb explodes near you? Or gunfire?

Don't you think that these are reasonable questions and that we should all know the answers? Right now thousands of acres are being burned by an out of control wildfire that is 150 miles from San Francisco. This fire is burning over the power lines and water facilities that supply San Francisco. The city was put on alert that severe damage might happen and the city could be without water or electricity for a period of time. Are YOU prepped? If it is not a fire it could be an earthquake or a hurricane or a tornado or a cruise ship disabled out in the ocean. All these disasters are beyond our ability to control. But we CAN control whether or not we are prepped.

"The Prepper's Survival Guide" by Bryan Foster is an introduction to Prepping. It contains definitions (do you know what a bug out bag - BOB- is?). It compares self-reliance to prepping. He lists the Ten Commandments of Prepping. There is lots of good advice about items you most likely have not considered. And he actually describes exercises the family can perform together. I liked the one where the family shuts off the electricity, gas, and water and spends the weekend together. After that adventure there are probably a lot of things you would change from self-reliance to more prepping.

I highly recommend getting these two books by Bryan Foster. They are published in paperback and one is available as an EBook. I would recommend purchasing them as paperback so you can keep them on hand as a reference book. Your kindle or nook won't be working if electricity is not available for charging, and the internet connection may also be down.


"A Guide to Sheltering in Place" 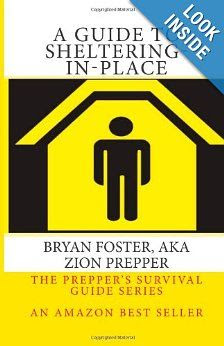 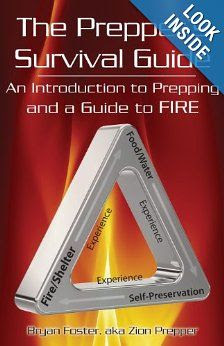 Survivalism is a movement of individuals or groups (called survivalists or preppers) who are actively preparing for emergencies, including possible disruptions in social or political order, on scales from local to international. Survivalists often acquire emergency medical and self-defense training, stockpile food and water, prepare to become self-sufficient, and build structures (e.g., a survival retreat or an underground shelter) that may help them survive a catastrophe.

*The general collapse of society caused by the shortage or unavailability of resources such as electricity, fuel, food, or water.

* Widespread chaos or some other unexplained apocalyptic event.

Available for Kindle or paperback